Tetovo – The City of Colours

Pena River and Shar Mountain beautify the north-west Macedonian city of Tetovo. Lot of cultures, colours, traditions and customs come cross in this historic city, just 40 km away from the capital of Macedonia, Skopje. Wanting to get first-hand experience and an insight of how the minorities live in Macedonia, the participants on the youth exchange Raise Your V.O.I.C.E organized by Mladiiinfo International, went on a day trip to this town, predominantly populated by ethnic Albanians. Find out more about their first impressions and reflections through the photo-reportage they have prepared. 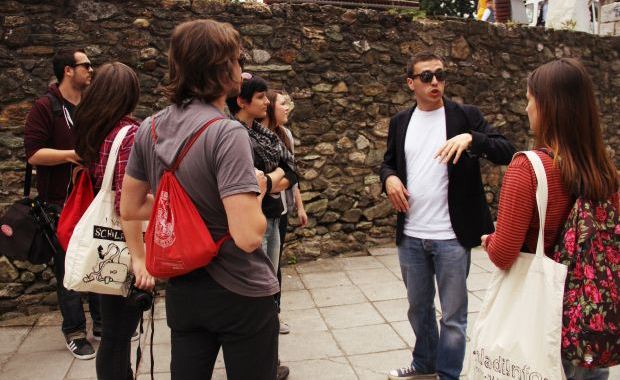 The organizational team of Mladiinfo shares their so-far impressions by Tetovo with the participants from Spain, Belgium, Croatia, Serbia, Bosnia and Herzegovina and Macedonia and provides them some background information about the city and the country. Tetovo has not only been a crossroad of cultures, but also an important political center. The political parties of the Macedonian Albanians, the Democratic Union for Integration and the Democratic Party of Albanians, have their headquarters here. Tetovo is also known for its vivid downtown.

One of the main sightseeing points and an important cultural symbol is the Painted Mosque (Šarena Džamija in Macedonian). Located in a peaceful environment, surrounded by a park and a river, for almost 6 centuries has stood this remarkable religious object. The main reason why the mosque is called “painted” are its walls, decorated with bright floral paintings. According to some sources, The Painted Mosque is also unique due to its depiction of Mecca, believed to be the only example of the the illustration of the shrine of the Prophet Muhammad in southeast Europe.

However, certain rules apply when you visit a place with religious significance. Do not forget to take off your shoes before entering a mosque. “We did so”, says Mia, a participant at the exchange and comments: “The carpets inside were so soft, I didn’t want to put my shoes back on”.
Every Thursday there is a huge market in Tetovo. “It’s remarkable what you can find here”, Bert shares his impressions. “From vegetables to clothes and much more. The fruits and vegetables are probably the freshest you could find. Even the pastries are made on site”, he comments.