The cozy town in Slovenian Istria – Piran is certainly a place worth to visit. Not only it is famous among Slovenian and foreign tourists for its breath-taking sceneries, crystal clear water and hospitality of its inhabitants, moreover, it got world media attention for having the first black mayor in Slovenia and in the region. Peter Bossman, a candidate of the centre-left Social Democrats leads this multicultural town from 2010.

According to the Slovenian Statistical Office, in the Obalno-kraška region, where the town of Piran is located, lives a total number of more than 9800 inhabitans, considered as national minorities. More than 70 percent of them belong to some of the former Yugoslav nationalities. On the other hand, more than 20 percent belong to the EU nationalities, with a significant presence of Italian community. The mayor Bossman, explains how this multiculturality works in practice. In this interview, he talks about the integration of minorities in Piran, but also about the living-together and dialogue in Slovenian Istria settled between the Italian and Croatian seacoast.

Mr. Bossman, could you please share with us your story. What it means to be the first elected black mayor in Slovenia and how is your personal experience living and working in Piran?

Peter Bossman: As you can see, I am not from here, I was not born in Slovenia, but in Africa, in Ghana. I came to Slovenia, when it was part of Yugoslavia, just by chance. I have not planned to come here, but because of politics, because I was an active student, I had to leave my country. I got the visa, so I came to Yugoslavia to study medicine, later on I got married here and started a family. In addition, I began to work as a doctor, I built my career in Slovenia. I was always interested in politics and five years ago, I was elected as a mayor of Piran. 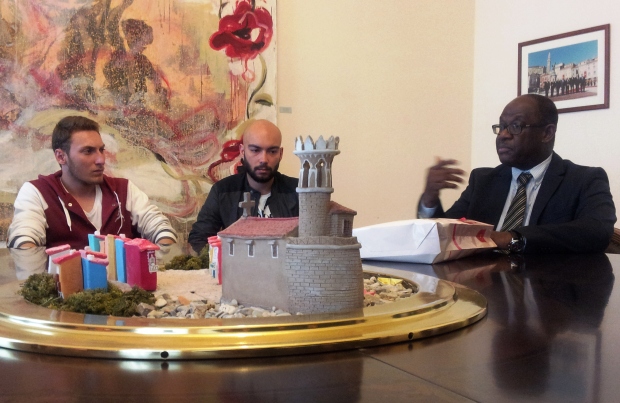 During the interview with the Mayor of Piran, Mr. BossmanWhen I came to work as a doctor, it was 30 years ago, people were talking about me like “the black doctor”. And then, one day, they started to talk about me as “my doctor”. When that happens, you know you have been accepted by your compatriots. I did not think I would run for the local elections. Then, six years ago people came to me and said: “Mr. Bossman, what do you think about accepting a nomination for a mayor? I replied to them: “Are you crazy? I would have never been elected.” And they said: “No, every time we ask people, whom do you trust, your name always came out.” And after I heard those words, I thought: “Maybe I can be elected.” Firstly, we used the Croatian media to talk about me. We thought that Slovenian media will not support me, because of the media law in Slovenia which foresees equal media space to each candidate, so a story about one candidate would also understands stories about all the other candidates. Then, when Croatian media started talking about me, the Slovenian press began to report about my activities and people started to trust me. Moreover, we used also new media in order to approach the young people in Piran.

Peter Bossman: This is a bilingual area, we speak Italian and Slovenian here, as equal partners. So if you go to the shop here, they can speak Italian and they have to understand that language, too. All shops should have a receptionist who can speak Italian. The Italian minority is a small community here, but they have been living here for many years. This is their home. That is why I think it is important to respect the fact that they are a part of the population here. I do not like using the word minority. When we talk about majority and minority, we are treating them differently. Yes, we have to take care about some small numbered groups and they must have equal rights. In my community, there are Slovenians, Italians, there are people from Macedonia, Bosnia, Kosovo, Croatia, Serbia. There is also a community called Istrians, because this is the region of Istria and they speak Italian, Slovenian, Croatian, and other languages. Additionally, there is a small African minority group here, only two of us, but it is important that everyone who lives in this community feels as a part of the community of Piran.