Our Good Earth (Наша Добра Земја) is the first organic food cooperative of buyers in Macedonia. They have started as an informal group of twenty families in search of organic, ecological local food from the most environment friendly and cleanest regions across the country. In less than two years, creating a budget with their own donations, the team of Good Earth has visited many producers and sneaked into the most of well-hidden villages to visit many agriculturalists and find seeds and products that usually do not reach the market.

“The interest in Dobra Zemja grew, and soon we became 100 families. Then we discussed whether we should and if we are willing to register an entity, so other people can enjoy the results of our research and work, “ says Biljana Filipovska from Dobra Zemja.

In 2015, Dobra Zemja competed for the Social Impact Award in Macedonia, being organized by Mladiinfo International in partnership with the Sparkasse Bank in Macedonia and the Newman’s Business Accelerator, and won the first place voted by the jury. In our newest interview we took the time to talk with Biljana Filipovska, one of the main initaitiors of Dobra Zemja, so let’s find something more about them!

Mladiinfo International:  Biljana, could you tell us something more about yourself, but also introduce other members without whom Dobra Zemja would have never stepped forward?

Biljana: I am MBA myself, and my life so far has taken me in the USA, but also afterwards in Greece for 8 consecutive years. I have graduated at the American College in Thessaloniki and have finished my MBA in Athens. Aside, I have worked in the Macedonian Embassy in Greece as well. I have encountered work in different companies abroad and also here in Macedonia, so after collecting so much experience, and combining it all together into a valuable core of ambitions and motives for the future, the story of Our Good Earth started being written.

Part of the core team of Our Good Earth is also Biljana Buzarovska, a psychologist who has lived in Germany and she has already re-lived the experience of what we aim to bring to Macedonia right now. I can say that she is a passionate lover of new food and combinations in cooking, and what she immensely contributes for our team is a lot of patience, non-compromising our values and she grows a loving and long-lasting relationships with the people who surround us, both producers and members/customers.

Aside me and Biljana, we also have Ivona Baru, who is an architect and who for many years with working and living experience in Romania where she has graduated. She is interested in sustainable life styles when it comes to building sustainable housing, therefore she has been part of our team that has participated in building an eco-house with earth bags.

There are so many more valuable members and the list can really go long here. I would simply put that Good Earth would not be where is today if it wasn’t for any of them.

Biljana Buzarovska (on right) and Biljana Filipovska (on left)

Mladiinfo International: When did you start your initiative and why particularly organic food is your cause?

Biljana: Being exposed to global information to what is happening around the globe and at rapid rates, for instance: the degradation of soils, natural preserves and habitats, for us made it simply unavoidable to stay aside and not take action. So, the biggest stimulation was raising awareness, and that is the least we can do. Our Good Earth in this context is our personal response to what is going on over the globe today. Not only that, but we do take a look on a wider picture here: the food production, the use of goods, plastics, treatments towards other alive beings that we share resources with.

Within our response, we have introduced for the first time in Macedonia: a weekly organic basket which is being delivered to your doorstep ecologically, by bicycle. Therefore, this makes our start towards community-supported agriculture, which is a very well known concept in the world.

With taking individual, but also collective steps altogether for the betterment of our livelihood, of the care for our environment and securing production of healthy food and healthy lifestyles, I think we can do much better, than behaving as a specie that would rather behave in a egocentric way.

Mladiinfo International: At the beginning of this year, you have applied for the Social Impact Award 2015 in Macedonia, and you also came out as winners. How was the journey for you?

Biljana: I would first take the occasion to express my gratitude towards the team of Mladiinfo International who coordinated the award in Macedonia, and then to everyone who voted for our idea, and also the jury, who have recognized our effort and values.

With the Social Impact Award we identified an opportunity through which we can take the things on the next level with Dobra Zemja. Anyway, we did not expect it that we would won a prize actually. And when we did, ideas for what to do next with the award kept coming naturally.

But, let me go back with the story… we have two great student food coop members. This was one of the conditions that made Our Good Earth eligible as an entity to go for the contest. They pulled forward and fast so energetically preparing the application, and subsequently a wonderful video that was required once we were shortlisted as semi-finalists. I remember that the filming of the video happened during our peak day – when we did pick up of baskets.

We felt that we deserve an award, but I will say again: we did not expect it. At the very announcement of the awards event, when the 3rd and the 2nd placed teams were announced, we thought Ok, that was it, we can go home now. And then they announced that Good Earth takes the first prize. It was happiness all over our team. 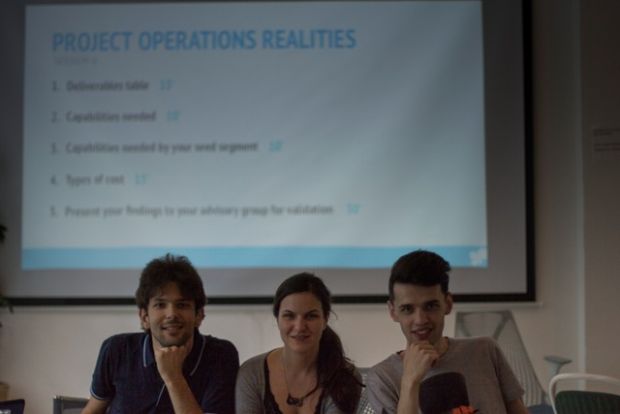 Mladiinfo International: How is the Social Impact Award helping you aside you have been given a recognition for your work?

Biljana: The award already launched us into a network of more relevant people from the sphere of social enterprises in Macedonia. For instance, just recently we were part of a discussion about social impact and whether the ‘green approach to enterprises’ is compatible to social impact. Participating in such discussion has helped us better define on how we feel about the social impact and social influence we are able to give to our community. To answer: what is the role of the green and eco concept in which we strongly believe? I tend to feel that our positive impact is really here on nature, and on changing the habit of people of instead using plastic bag to bringing their own packaging when shopping, so this makes a crucial strong social impact. And added to that… the non-usage of pesticides in the food we produce and supply.

What is the limit and the difference of the more socially oriented approach and the more green orientated approach? These are all relevant questions that could guide us how we can grow in the future. What if we employ 100 people from marginalized communities to reduce plastic usage for instance? I think we can talk here a super-social impact. 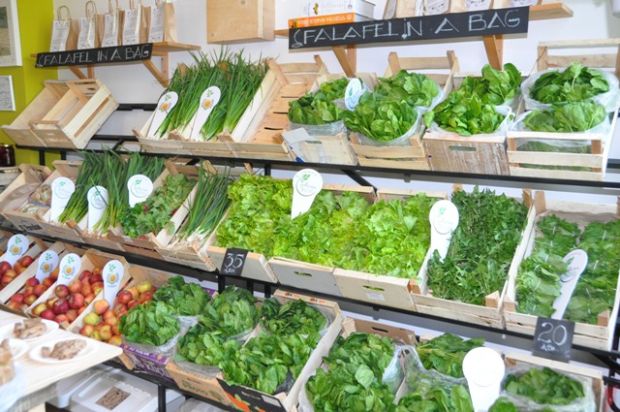 And yes, on the porch, some lovely organic food from Dobra Zemja

We are also happy that aside the recognition and the financial award, we are receiving another type of help through the Social Impact Award, and that is a valuable business-social consultancy. We are having these consultancies at the NewMan’s Bussiness Accelerator in Skopje and we should go through 8 sessions to meet different experts from different spheres. We truly appreciated and look forward for our work together as we can feel the consultancy is really productive and professional.

Mladiinfo International: Aside the Social Impact Award which was no doubt a challenge that you took, what can you identify as the biggest challenge in your job in overall?

Biljana: I think that the biggest challenge is to establish the contact with people who are not aware. The challenge to influence them on their path of development and showcase that there is a healthier lifestyle they can award themselves. It is a challenge to transfer what we already know to those have not been exposed to the information yet. We live in a world where we all have different points of view and it is not right to say that there is the one truth only. Somewhere in the middle of our interconnections with people, producers, members, there is a message we believe in and that we want to share and this message needs the common sphere of understanding.

Mladiinfo International: What are your plans for growing in the future?

Biljana: All our activities will have an umbrella of sustainability in organics. Organic production has become such a business as usual, that its core of preserving nature, biodiversity and people has been lost along the way. Capitalism and free markets are the way they are – our decision and actually the only way to go forward – is to think and act holistically – not egocentrically. Such an approach may have a price, but we are ready to go past that.